The Gargoyle: A Common Lure With a Different Look 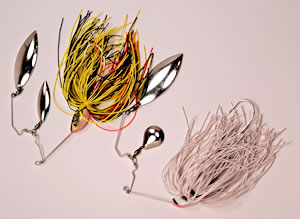 Sometimes I don’t know if it’s a blessing or a curse. Tackle tinkering. It’s great to be able to make a lure that’s just a little different than what you can buy off the shelves. But at times, like when I’m waking up at night to jot down a lure idea, I think I may border on insane. What the heck, insane is fun!

Even a simple tandem spinner bait can be tweaked here and there. That’s why I was so excited years ago when I saw a picture of this spinner bait design that I had never seen before. I honestly don’t remember what old magazine I saw it in. I don’t know if it was manufactured at one time by a major manufacturer. I don’t think so because I have been buying lures and scouring tackle catalogs since about 1970 and I don’t remember seeing them. I remember that it was called the Gargoyle, so that’s what I’ll call it and hats off to whoever invented it.

It’s a tandem spinner bait but with a twist. As you can see by the photo, the blades configuration is a little different than the typical tandem.

Instead of the blades rotating on the same shaft, the Gargoyle has it’s blades spinning on two different planes. What’s the point, you are probably saying.

Well, it does have some advantages. First, they come through timber and weeds really well. Standard tandem spinner baits have a leading blade that rotates around a shaft. This rotating blade can wrap weeds and foul the cast. The Gargoyle sports two blades that spin off swivels which don’t catch weeds.

It is also a very stable bait. It can be slow rolled along deep weedlines or burned over the tops of some shallow cabbage. In either case, it doesn’t roll over like some unbalanced tandem spins.

What I think is the greatest feature of the Gargoyle is it’s image and profile. With the blades stacked on top of each other this bait creates a very large target, maximum flash and the image of a school of baitfish. This can be a very effective characteristic for dark water conditions or where you want to present a larger bait without the bulk and resistance of larger blades.

Here in Wisconsin I really like this bait as a run and gun lure for multiple species like Bass, Pike, and even Musky. Yes, Musky. This is a great lure for anglers who aren’t used to casting big lures for Musky. It’s a relatively small lure that fishes big. Add a four or five inch twister and it fishes even bigger, yet you can still use this bait on a medium or medium heavy spinning or casting rod.

I like head sizes from one-half to three-quarter ounce for my Gargoyles. Any of the Do-It molds in these sizes will work well. These include the Style “H” Jig, the Banana Jig, the Bullet Jig, and the realistic Ultra-Minnow Jig. For realism, it’s hard to beat the style “H” or the Ultra-Minnow. For slicing through vegetation I like the Ultra-Minnow or the Bullet head. For crashing through timber, I really like the old Erie Jig design.

Because I am using this lure for everything from Bass to Musky, I mold mine with a long shank 5/0 spinner bait hook like the Mustad 32608N. The long shank extends back into the skirt and allows room for plastic trailers. I also like adding a 4/0 trailer hook under most circumstances.

For blades, I have done a lot of experimenting and I like a size 5 willow blade for the main (top) blade. For the smaller blade below, a size 3 or 3.5 Colorado blade or a size 3.5 willow both work perfect.

Both blades are attached with a #2 ball bearing swivel. The lower blade and swivel attaches to the wire shaft via a #3 clevis which is held in place by two one-eighth inch hollow beads.

Because these blades stand off quite a way from the head, I prefer a stiffer .041 wire for this bait.

Bending up a Gargoyle is a little more tricky than your typical spinner bait. The wire comes out of the head and returns back at the line the like a normal bait. But here you will create a forward facing U shape that gets the first blade. You will only need to add the #3 clevis and beads at this point. The swivel and blade can be added later. Then the wire continues vertical before flaring off at a forty-five degree angle before ending in a loop for the top blade. I highly recommend that these bends are done with a quality round-nose pliers rather than a table top bender.

It is nearly impossible to describe the bending geometry in text. A picture is worth a thousand words in this case. Study the photo and I guarantee that you will get the hang of it in one or two attempts. But here is a word of advise. Once you get one that you like and it works well…never let it leave the house! That one gets retired as your pattern.

The Gargoyle is a great twist to an already great lure, the spinner bait. If you fish spinner baits for Bass, Pike, or even Musky, you are going to want to try this one. Plus, it’s always great to catch a fish on a lure you made yourself.