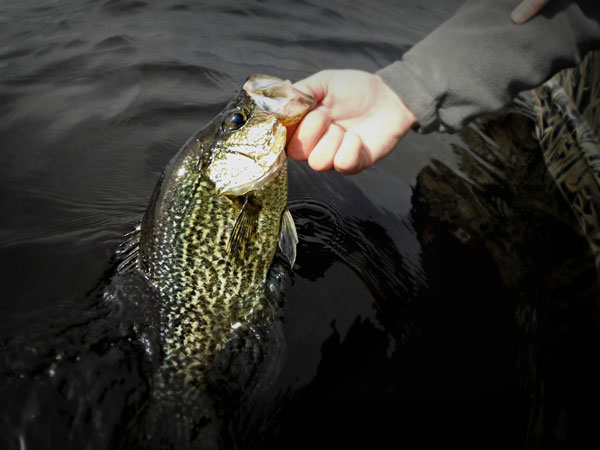 The Hot Spot. Every water has one, or some. Everybody has one, or some. They seem to appear as if magic, yet they are not magic: they're an evolution.
I have a Hot Spot on what I call a lake but which is actually a meandering 4 mile long reservoir that has a mix of waters all wrapped up in one. It has steep shorelines that fall into equally steep, fast falling, deep water depths easily 30 feet deep within 20 feet of shore. It also has boggy marsh areas best known for mosquitoes. Then there are the other areas that are medium depth channel or bay areas. At times there can be several "hot spots" going on at the same time, but there is only one HOT SPOT that I call mine and its hot right now in the very early spring of the year.
"So what makes it hot?" you may ask.  Well it’s a complex answer, much of why this place is an evolution. That said, I'll take you into this place and guide you into what I have found.
To begin with this water is fed by two branches of the Zumbro River. Neither are particularly larger at normal flow by can get large with heavy snow melt or heavy rain falls. Where they merge is considered the head of the lake. They flow for about 1 mile and a half thru a wide shallow channel, then then channel narrows down and deepens to about 20 feet and the water picks up some velocity before it runs into a shoreline surprise where the current splits in two directions. To the right the current simply heads downstream. To the left the current circulates thru a wide relatively shallow bay that harbors a marina. Amazingly, where this main current splits it runs smack into a concrete staircase with a concrete landing at water level and just thirty feet to the left is a small wooden dock anchored to shore. There is another set of steps, wooden, that go right to the dock.  Right in front of this dock is THE HOT SPOT. Private property, drive right up and park, then walk 15 feet to the top of the stairs.... doesn't get any better than this does it?
In about late January in most years I start watching the open water that exists down about a mile from the confluence of the two rivers. Weather will dictate the open water's slow progress to where the current splits and slowly it begins to creep up on the shore where the dock resides. By late February I can expect to see open water at the dock with ice yet in the bay with the marina and again to the right where the water is broad covering a large sand flat that eventually narrows to a slightly deeper channel. The area to the right is where crappies will gather around the end of February to feed in frenzies on that sand flat. This is always a great late ice fishing spot. The open water has had almost two miles, when one considers the open rivers above their merging point, to take on daily sunshine to warm and it’s this warmed water that will draw tons of these fish from under this ice during the daytime at this spot I call hot. There's 12 feet of water out about 50 feet from the dock that gently shallows up getting nearer the shoreline' Also, the shoreline at the immediate area to the right, behind and to the left of the dock is rip rap of large rock that's been pegged with old Christmas trees. The current on the left of the steps gets slowed down since the water shallows up some so these trees become magnets for the crappies to sit behind and bask in water two or three degrees warmer than under the ice only twenty feet away. The warmer water also pulls small forage minnows into the area as well as livening up bug life from the mucky bottom. It’s just an area that offers a lot if a guy plays his cards right.
Two things I am big on in the early season like this is the barometer reading and water temperature. An app on the phone covers the barometer reading down to the second. The water temperature I get using a submersible thermometer hung on a ten-foot length of surveyor's cord with a loop tied at 5 and again at ten feet. At this early time of the year I use the 5 foot loop clipped to a plastic bobber large enough to suspend it and cast out into the open water in front of the dock and left for ten minutes [the ten foot gets used in the summer]. Why the depth? Stop and ask yourself how many crappies you catch early on like this at five feet and how many you get right at the surface.  Between the barometric reading and the water temp you can learn a lot about where those fish will be in the water column and whether they will be half active, on a tear, or almost boringly slow. And this information can help get you to what to use for bait.

With open water temps hovering at about 36-37 degrees while fishing good daylight I keep the bait size down to about 1- 1/2 " and most likely it is going to be a Do-It Thump-It. Daily, as water temps begin to fluctuate slightly higher day by day, the bait's size can be increased to match the tenor of the fish and the barometer and water temperature. Do-It's vast selection of panfish sized molds allows the angler to custom fit the bait's size and action to what the fish want and are willing to hit the best. The Fat Fork in 2-1/2", the Beetle Bug, the 2" Glider, the Flap Jack, the Go-Go Grub, the Fry's from 1.75" up to the 2 -1/2 " , the Stinger Wutzit at 2 1/2", the ever popular and productive Thumper Swim Fry, the 2" Ripper and now the Crappie Fluke all offer action and profile options that will drive crappies to the brink. And with Do-Its extensive selection of X2 colorants to use straight from the bottle or to tweak into a dazzling custom color, the tackle crafters like myself have nothing to fret when it comes to finding what color those crappies will hit best. Color. Action. Profile. Do-It has the tackle-crafter covered. I have two Hot Spot colors that I consider my go to baits: purple/ chartreuse tail and bluegill glitter/chartreuse tail. The bluegill glitter color I mix myself using equal parts of Do-Its .015 navy blue, moss green, purple, and copper glitters and adding them to clear plastic. 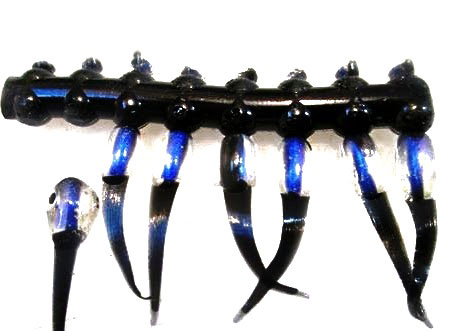 Hot Spots are everywhere but they seldom mean instant fish. The locations need to be delved into, to understand the physical things that help make them click. The average crappie has a brain slightly smaller than a small pea, yet people are forever baffled by crappies when the same people try to figure the fish out, even while sitting squarely in one's Hot Spot. People cannot communicate with fish so trying to understand why they do something completely 180 degrees from what people think they should do equates not into a fish problem, but a people problem.  It takes a people kind of understanding of the elements... the weather, the barometer reading, water temperature and water clarity, how the sun on water affects crappies - and this list goes on and on - to know why that spot is hot and stays hot.  All of this requires time and study and recording this info in fishing logs, then studying those logs.  This can help spell success which can help lead people to understand the why's and how's of Hot Spot successes.
I'm like most anglers, not having enough time to spend on my Hot Spot so I try not to have any of this time slip by fretting over what fish thinks or want. Do-It helps me in the tackle department and the phone and thermometer do a great job in theirs so I have plenty of time to think about other things...like how I'm going to fix my crappie dinner thanks to The Hot Spot.
Crappie Tom
Previous Post Next Post