Give Them What They Want

0 Comments
Author: Tom Sawvell
Date: Aug 24, 2020
For decades the goal of most all fly tiers has been to match the hatch....create flies that look close enough to real that they fool those old hardened trout. Even bass fly anglers try hard to create and offer baits that simply look real, natural. I fish Lake Superior a lot during the summer months. The days of being out there in a boat are gone now but the breakwater in Two Harbors, Minnesota juts out into the lake about 1/4 mile if not a bit more and offers water anywhere from 35 to 80 feet deep, plenty for salmon and lake trout and herring. While all three of these species have a thing for lures that are gold with some bright orange on them and will willingly hit most anything tossed out there with that color combination, the herring presents a bit of a glitch.
Herring have a very small, soft mouth. Often they'll chase and hit a lure that a salmon or trout can easily get hooked up on only to have the hook too large for the herring to hook up. Shopping for lures the herring can hit and get hooked up on can be done if one is willing to spend the extra money to change out the hooks on 1/4 ounce Krokodile or Coyotes lures, but then the hooks are often made of too light of wire should a decent salmon or laker decides to hit. So, in part, I have addressed the issue of what to use for herring and it comes right back to this match the hatch ideology.
Spinners are now my herring lure of choice. Yes, its still of the tried and true gold and orange color scheme but that color is basically non-existent in a store bought spinner with heavy enough hooks to handle the larger fish that can hit and then the store bought spinners generally have too large of a spinner blade and generally lack the flash that's an absolute with the big lake's fish. Since I make and use most all of my Lake Superior lures, spinners were a simple study once I determined a couple of issues that needed attention.

First, the spinners needed to have a relatively compact weight that would allow for fairly long casts. I settled on Do-It's segmented polished brass lure body [#2808] which allows for partially dipping the body, the first large segment actually, into ProTec's flame red powder paint which gives me a super bright gold/orange color scheme.
Next, the spinner blade had to be small as compared to the overall size of the spinner. I settled on a #3 french blade of polished brass [Do-It item #2463]. I used an aftermarket die cut gold prism tape on both the inside and the face side of each spinner blade to get the utmost of flash.
Finally, and perhaps most importantly, the hooks. As mentioned, Lake Superior has salmon and lake trout, both of which call for a serious hook. The hook's size is dictated by the small mouth parts of the herring but the strength is dictated by the larger more aggressive fish. I really like the Mustad TG-76NP-BN in a size 6 or 8 and I make spinners using both sizes employing identical components that I've listed. If I get into smaller herring while fishing the #6 hook spinners I can quickly switch to a #8 and stay right on track with the hook-ups. The TG-76-NP-BN is just a bit heavier in the wire than the traditional KVD TD-58-NP hooks and stand up to larger fish very, very well. I have never had to sharpen one of these hook right from the container where they come out deadly sharp....an attribute that's definitely needed on Lake Superior fish. They just don't corrode either. 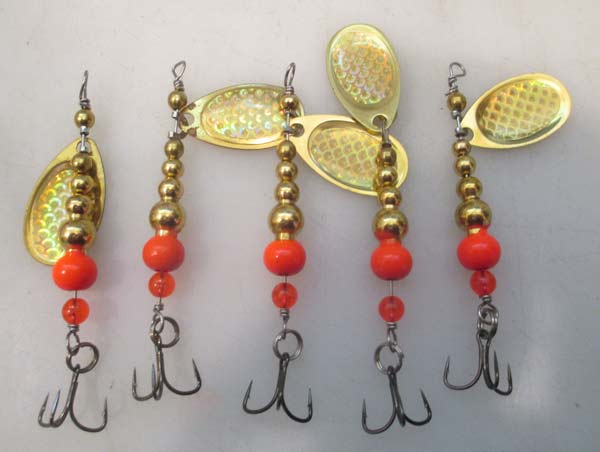 Once the bodies are painted and cool the spinners get put together. I use a Do-It Twisted eye wire shaft of 4", Do-It part number 1908. I slip a 1/4" round orange plastic bead on the wire followed by the body with the larger, painted end down against the plastic bead. Next a 7/32 solid brass bead [Do-It # 2351] goes on followed by a 5/32 solid brass bead [Do-It 3 2348]. The clevis is slipped into the spinner blade making certain the blade's cup is against the shaft/body then another 5/32 solid bead is slipped on the shaft and the eye formed using a round nose hobby pliers with the excess wire snipped off tight to the wrap making the eye with a side cutter. There it is....a herring spinner fully capable of handling a serious brute should one come visit.
Herring are bug feeders in the greatest sense of the term. Schools can be seen slowly cruising down at 10 feet while following bugs on the surface and if the light hits them just right their lateral lines are a super bright red much like a rainbow trout. Light or not out of the water that line disappears entirely. They'll zip up and snatch bugs off the surface, sometimes so daintily they leave no trace of having grabbed a bug, yet at times with the top third of their body clearing the surface muck like a porpoise. A Spinner or lure retrieved thru a school of them will have five or six or maybe a dozen chase the bait quite often resulting in a hook up.
While the herring don't share acclaim that salmon and lake trout do with anglers, they are a dynamite dinner fish and are considered by many to be a first class food fish. Along Lake Superior's North Shore herring are sought out at restaurants where they are featured as daily specials and batter fried to out of this world goodness. The famed "fish boils" that the north shore is often host to use herring as the favored fish and to attend a traditional boil is something the one simply has to partake in not only for the fish and fine dining but all of the preparations. It's truly an all evening affair.
Previous Post Next Post